We meet 13-year-old Werner who lives in East Berlin and 10-year-old Sabine who lives in the countryside. Through their eyes we see different aspects of life in the socialist idyll of the DDR — farming, busy factories, strong families etc. They are both members of sports clubs. Werner wants to be a runner and Sabine aspires to be a gymnast. We see them going to their beds and we enter their world of dreams.

These dreams take them to the year 1984 and the Olympic Games which are being held in East Berlin. They fly over the city in ‘energy globes’ and see the incredible, futuristic stadiums that have been built. They begin to explore. Werner hovers above the stadium and watches the athletes of all nations parade around the track. Sabine’s energy globe is floating under the Olympic pool. She looks up in wonder to see the swimmers glide above her. Werner is now looking down at the 100-metre final. The race is won by a DDR athlete. He realises it is his 21-year-old self. Sabine is above the gymnastics arena. She sees a DDR athlete score a perfect 10 on the floor. It is her at 18. Both children are now above the main stadium to see Werner receive his gold medal. We see that athletes from across the world have come together in peace through sport. The children see each other in this shared vision and wave. In a swirl of colour and sound they awaken back in 1976. Inspired by their dreams they go to train. The sunrise is golden — END 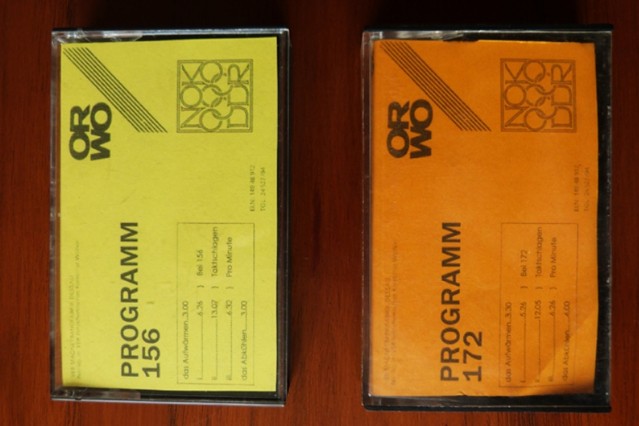 Q: How long did the project continue?
I would be summoned to Berlin generally in the winter to produce tracks for the upcoming athletics season.The last work I did was in 1983 doing pieces for the gymnastic team’s floor performances. The projectstopped as suddenly as it had started. I was given no explanation. I think it may have been due to theboycott of the Los Angeles Olympics.
Q: How did you retain the music?
Well, I was not supposed to take the music from the studio as it was state property but I did manage tosneak a lot out. I thought the master tapes had been destroyed or lost in the chaos after the wall camedown but one of the engineers, who ‘got’ it, had rescued a lot of them. We transferred them to digital inthe early 90s.
Q: Why release this now?
I made this music for people to train to. Because of the time and place I did it only a select few got to use it.I would like for more people to finally use and enjoy it. It is as simple as that.